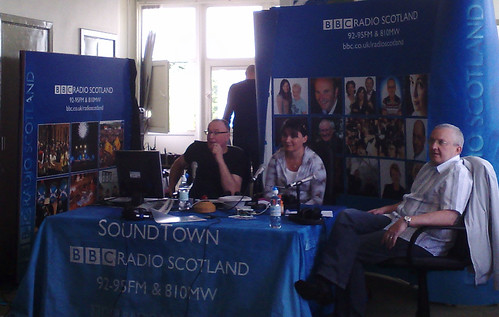 Stuart Cosgrove and Tam Cowan presented their ‘the most petty and ill-informed sports programme on radio? ‘ Off the Ball ‘ in a classroom made into a studio at Baldragon Academy this (Saturday 28th June).  This was a part of the BBC Radio Scotland ‘Sound Town‘ scheme where they adopt a school for a year.

My wife teaches at Baldragon and it’s been a tremendous success.  The kids have really enjoyed it and engaged in all aspects of the programme making/presenting; learning and building confidence.  The Radio Scotland Staff and partners have all been brilliant working well with the kids.

Today, Stuart and Tam had special guest Lorraine Kelly with a ‘studio’ audience made up of staff, pupils and friends in Dundee.

It was a blast!  They were typically iconoclastic and very little (apart from Motherwell FC!) escaped their acerbic wit.

There were a couple of local Dundee poets there who performed one of their own poems in the Dundee dialect ‘ to hoots and cheers from the very enthusiastic audience!

At one point in the programme, Lorraine (newly given an Honorary Doctor of Laws from Dundee University ‘ ‘for service to lip gloss’ as she put it) spoke about her love of Dundee.  How the city is going through a renaissance, that there’s loads going on in the City.  Stuart added his twopence worth, commenting on the success of the DCA.

I spoke to Lorraine briefly afterwards & told her about Go Dundee & she’s agreed to be a part of a future event ‘ so watch this space!

If you are quick you can listen to the programme again by clicking here.

4th July Fireworks over Manhattan Skyline
Personality and being/becoming yourself…