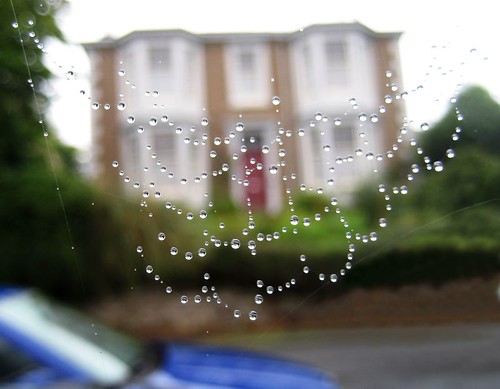 Pretty miserable weather yesterday and overnight, LOTS of rain… Went out to the car this morning to go to work and noticed the spiders web on the gate.

The beauty of nature… and I almost missed it.

What might you miss today because you are ‘under the weather’, or just (as I often am) in too much of a rush to get onto the next thing?

Reminded me of Nadine Starr’s meditations -see below

Meditations While Flying a Kite
by
Nadine Starr – 86 years old

“If I had my life to do over, I’d make more mistakes next time. I would relax. I would limber up. I would be sillier than I have been this trip. I know of very few things that I would take seriously. I would laugh more and cry less. I would be crazier. I would worry less about what others thought of me and I would accept myself as I am. I would climb more mountains, swim more rivers, and watch more sunsets. I would watch less TV and have more picnics. I would have only actual troubles and very few imaginary ones. I would feel only sad, not depressed. I would be concerned, not anxious. I would be annoyed, not angry. I would regret my mistakes, but not feel guilty about them. I would tell people that I like them. I would touch my friends. I would forgive others for being human and I would hold no grudges. I would play with more children and listen to more old people. I would go after what I wanted without believing I needed it and I wouldn’t place such a great value on money.”

“I am one of those people who live life cautiously and sensibly and sanely, hour after hour, day after day. Oh! I’ve had my moments, and if I had it to do over again, I’d have more of them. In fact I’d have nothing else. Just moments, one after another, instead of living so many years ahead of each day. I have been one of these people who never go anywhere without a thermometer, a hot water bottle, a gargle, a raincoat and a parachute. If I had it to do over again, I’d go places and do things and travel lighter than I have. I would plant seeds and make the world more beautiful. I would express my feelings of life without fear. If I had my life to do over, I would start barefooted earlier in the Spring and stay that way later into the Autumn. I would play hookey more. I wouldn’t make such good grades except by accident. I would ride more merry-go-rounds. I’d pick more daisies – and I’d smile.”

Coaching – where do we go from here?
Listening…